Where is Penny? Penny needs to rescue Mrs Farquhar

What started as an offer of help has ended up being a wonderful learning experience.

Mrs Farquhar, Mrs Spargue and Mrs O’Sullivan hosted an online learning Zoom meeting for our school. Each teacher presented a learning activity, and Mrs Farquhar finished the time together with a new story, ‘Nanny Mihi and the Rainbow’.

To get the book, Mrs Farquhar had to call over the school speaker, asking Penny to find her the book. We also had to find Penny, who was working with students. Penny came to the rescue. She found the book we needed in Room 16 and hand-delivered it just in time for the online session.

Mrs Farquhar had been given the idea of the book from her friend Mrs McKenzie, who is a teacher in Hamilton. She had read this story to her class a number of times.

After reading the story online with the pictures back to front, Mrs Farquhar gave out the challenge to make the rainbow at home using household items. Mrs McKenzie had indicated that creating the rainbow to start with gave her students a chance to talk about the colours, and how they worked together. Her aim was to use this starting point for learning to add to an art activity once her students returned to school. This is what teachers call preloading. The ideas and visual language are already in place for the extension of learning to occur.

Sneakily, Mrs Farquhar gave the challenge to the other teachers present in the online session as well as the students.

Who thinks Mrs Farquhar is being a bit sneaky?

Once the challenge was out, Mrs Farquhar wandered over to Room 16 and thanked them for the book and delivered the challenge, again. Could Room 16 please make the rainbow for Mrs Farquhar to share back to our online participants?

They worked together to make the rainbow on the floor of the classroom. They challenged their thinking by wondering where they could put items that are pink.

It was amazing to see the wide range of colours that Room 16 had in their classroom. There were some rules on creating the rainbow.. No pulling pictures off the walls. If someone has an object in their hand, it belongs to them. When placing an object in our rainbow, we wait our turn.

They took photos to send to Mrs Farquhar and share their learning.

Room 15, who were next door, had to stop and have a look at the exciting learning going on in Room 16. I wonder if they will take up the challenge next?

They took up the gauntlet. Mrs Green reported back that Room 15 loved the book Nanny Mihi's Rainbow. Together they discussed how they could make a line of objects that transition from light to dark and found them around the classroom. This aspect added  a bit of a conundrum when trying to organise rainbow making at the same time. Although, the class had plenty of blocks  and objects to make a rainbow. 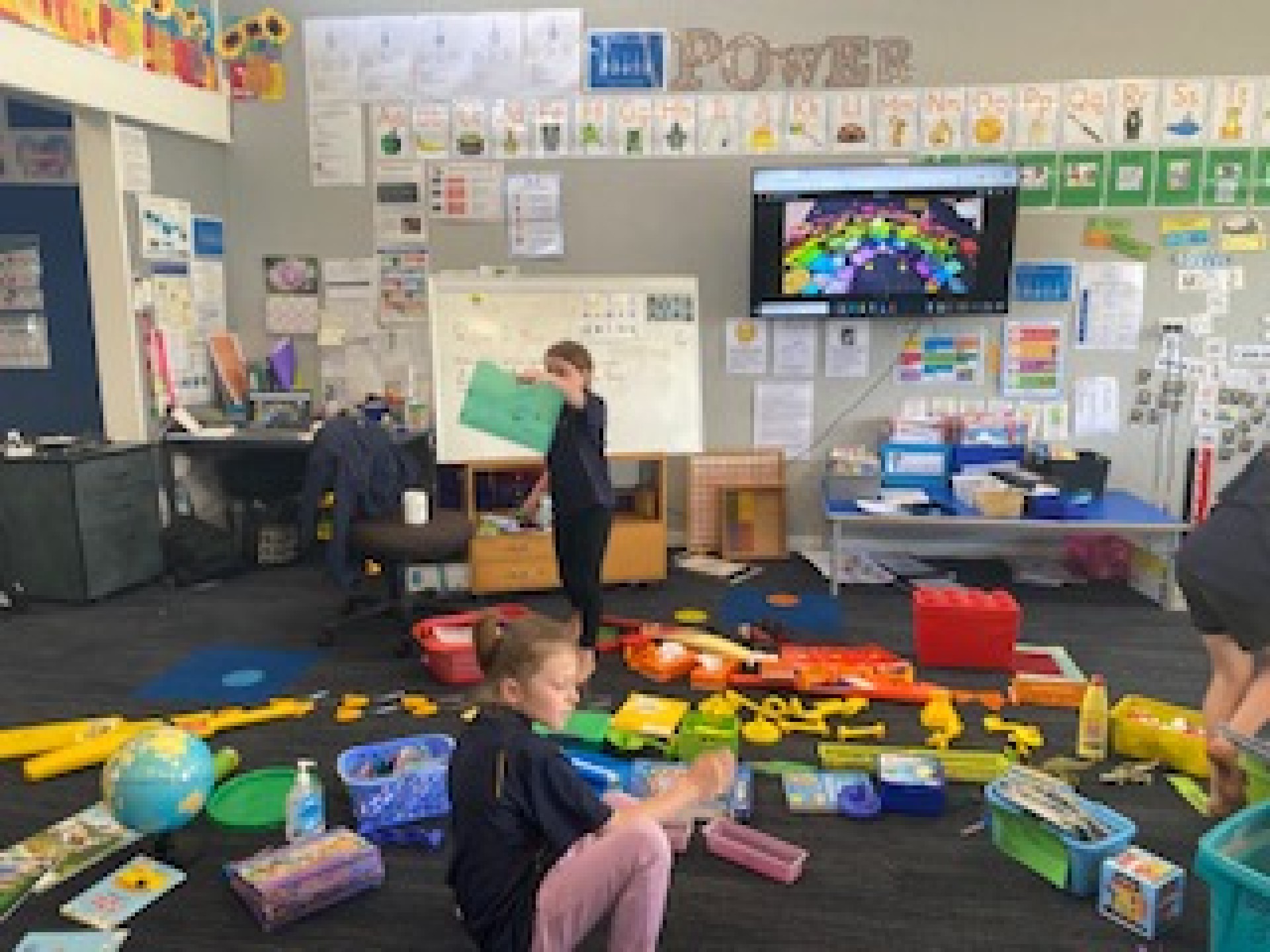 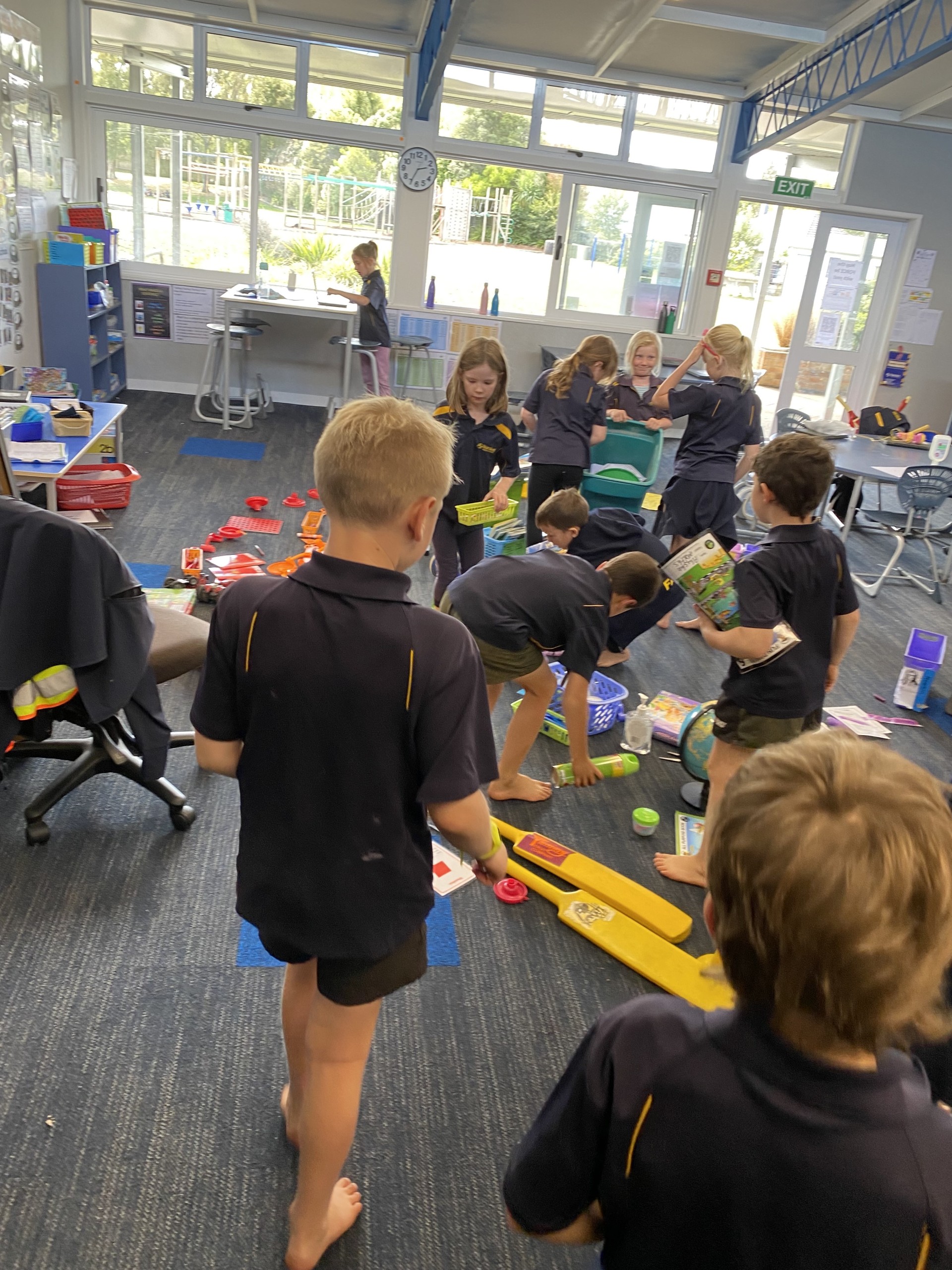 Remember, Mrs Sprague had heard the original reading of the story. A smallish group used the range of resources in the class to make a rainbow, and also extended the activity to make a line of light to colour objects. Serration of colour was difficult, so they solved the problem by clumping the same colour together.

Their line ended up with large groups of objects of the same colour instead of a natural line. 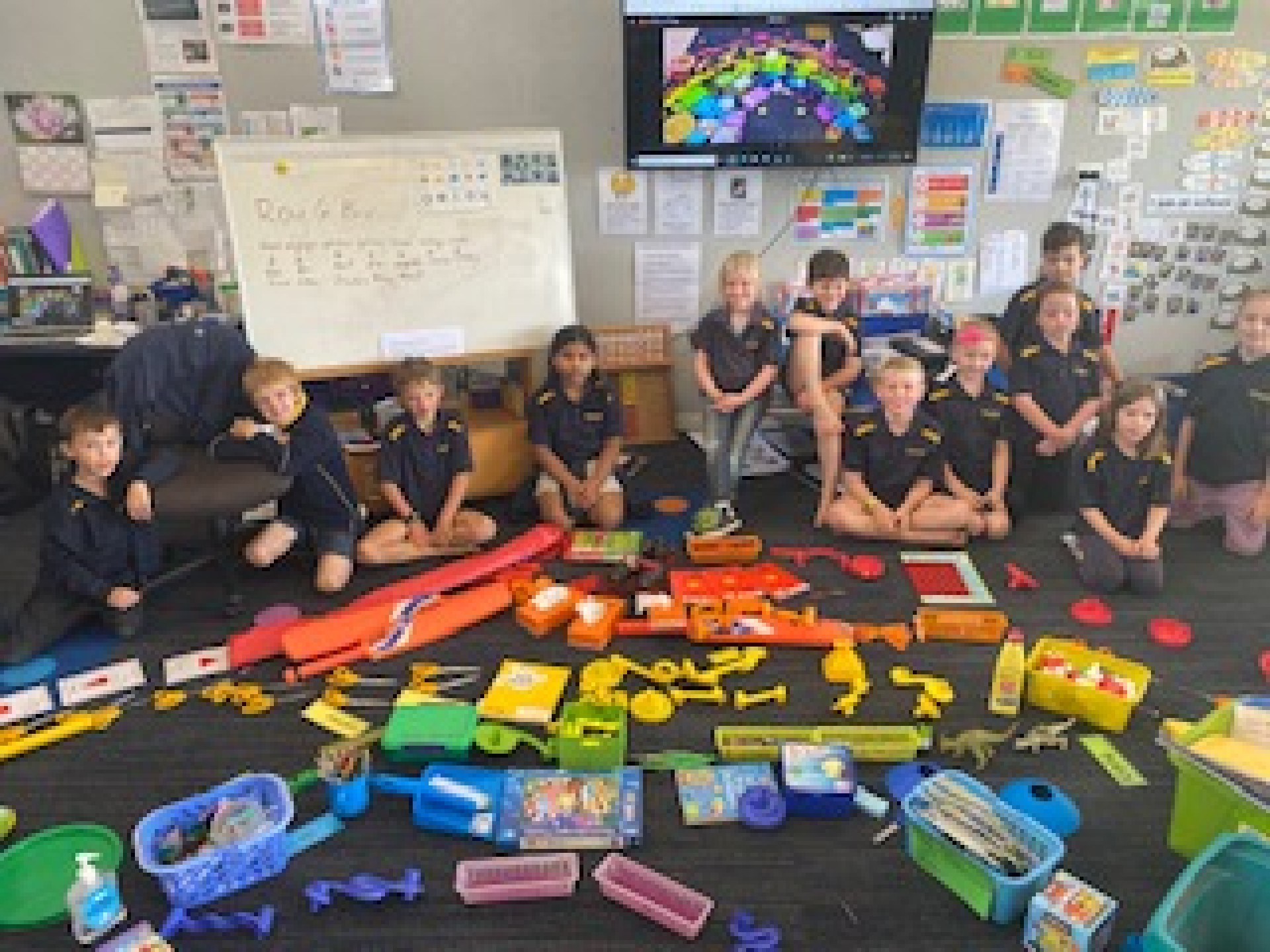 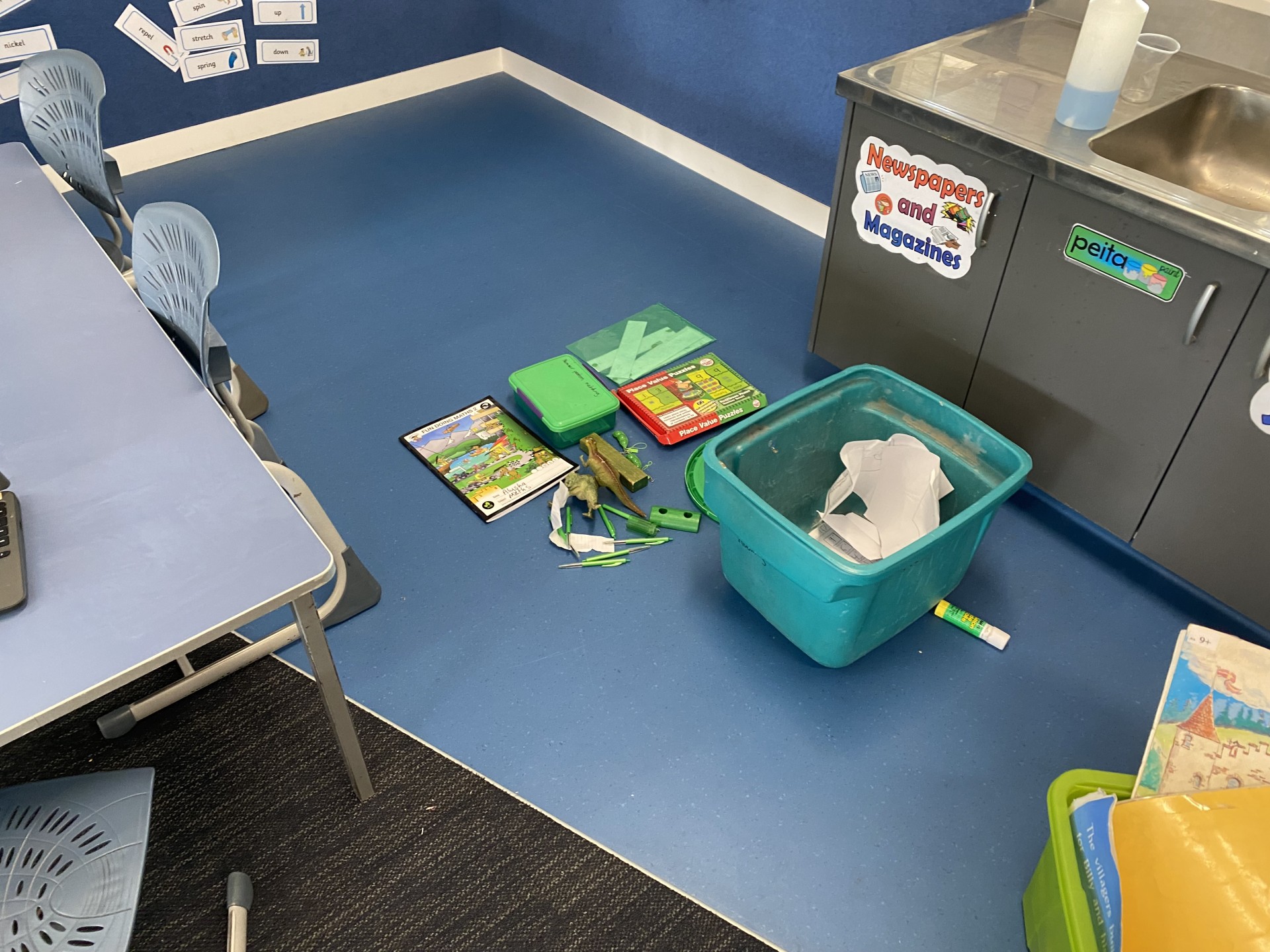 Creating a line of colour that moved from light to dark definitely added to the lesson. Mainly because our objects in schools are all one base colour. Mixing colour has become Mrs Farquhar's next step. Who to choose to work with? Room 3 or Room 16? That is the question. 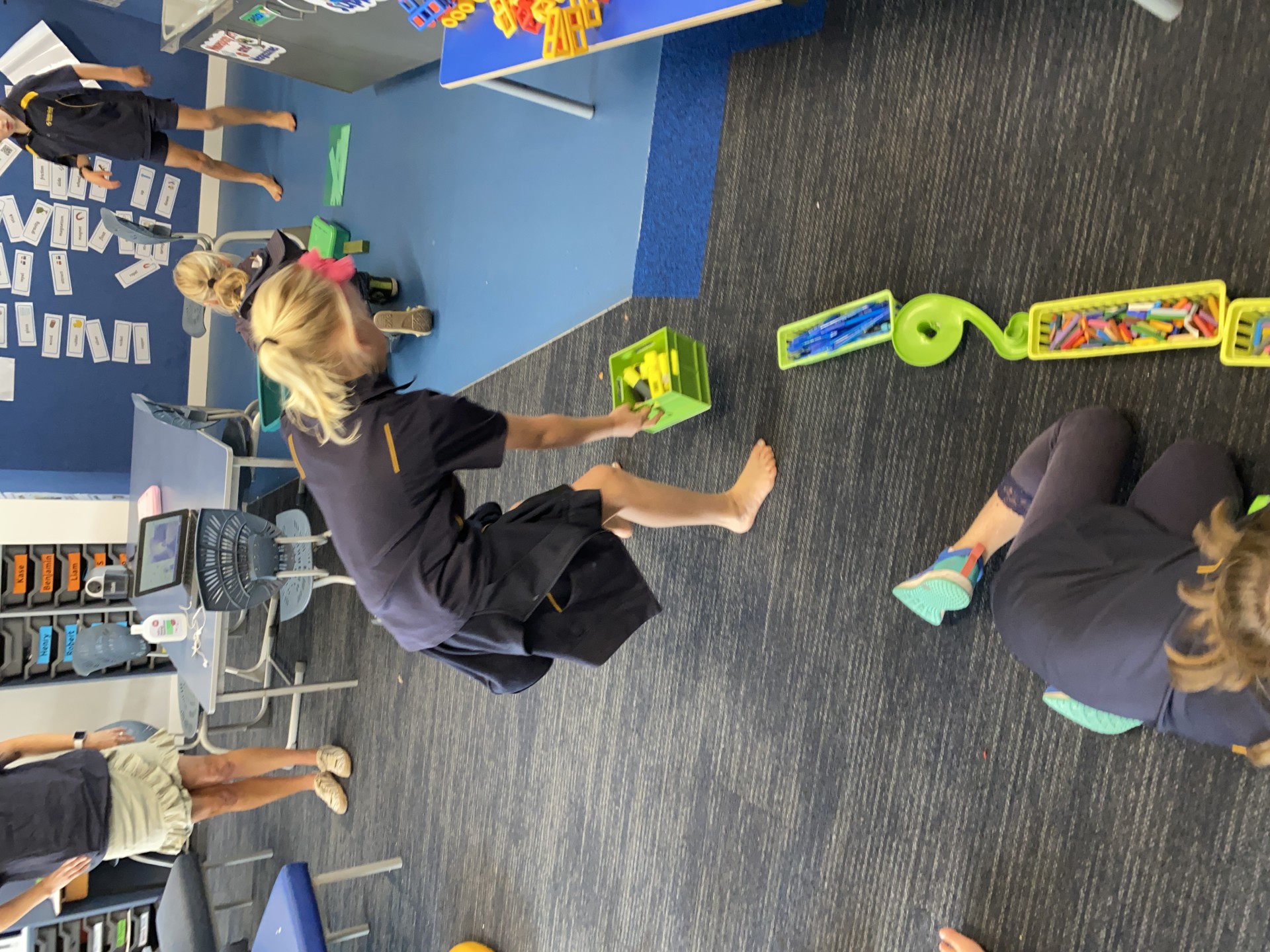 Credits to Nanny Mihi and the Rainbow By (author)  Melanie Drewery , Illustrated by Tracy Duncan